The keyboard and touchpad for the Mac that I got when I started working at Expressen (later Bonnier News) decided recently that it was time to call it quits and go into retirement. That got me a new and clean computer, it also got me thinking about the stickers on that computer and what stories they tell.

Below is an image of that mac and my older little trusty Toshiba netbook (currently running openBSD IIRC). As you can see on the toshiba there are quite a few sticker on it. 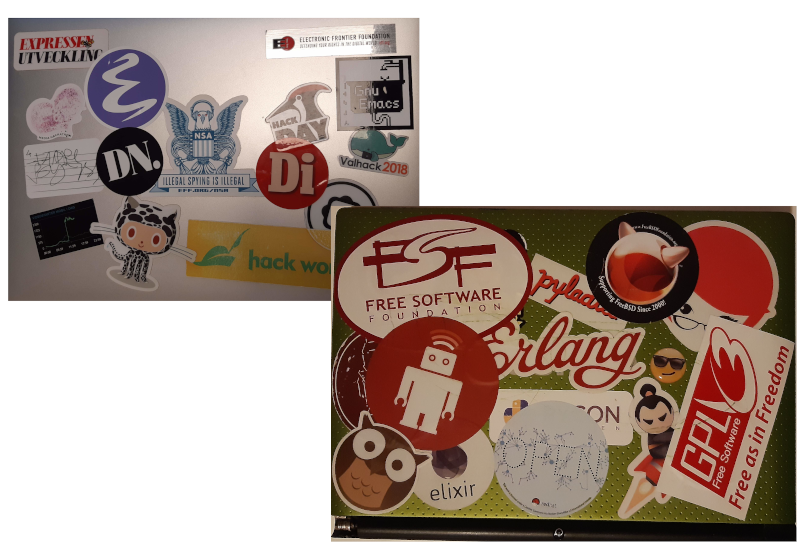 There is some archaeology to be done here and memories to dig up. Using my training as a earth science student I deduced that the bottom layers are of course the oldest ones let’s start there :) 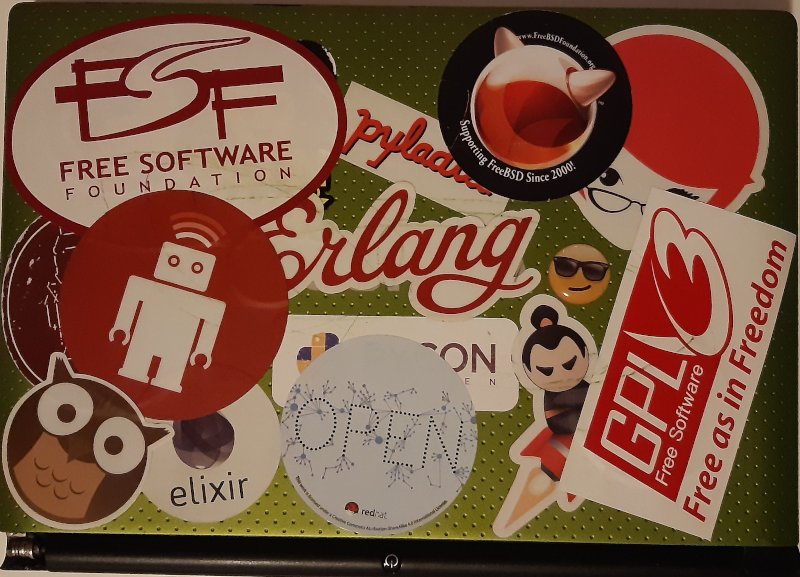 The first stickers I ever got was from my first developer conference I went to. The first Pycon Sweden in 2014. I went there as a volunteer (a great way to both help out the conference and also get to a conference if you can’t afford it) the first and second years and later I got involved in the board eventually becoming the board director for a brief time. I remember two great talks and subsequent discussions from that conference still to that day. 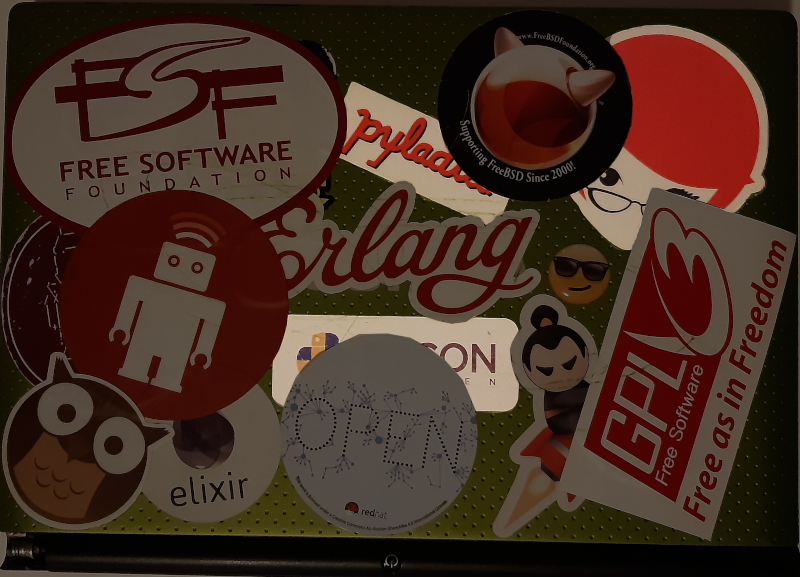 Another conference, now my first Erlang User Conference. I’ve written before how Joe Armstrong got me into this conference (again for free!) here. The one to the right is a basho ninja, the company behind the riak database that sadly went bankrupt. 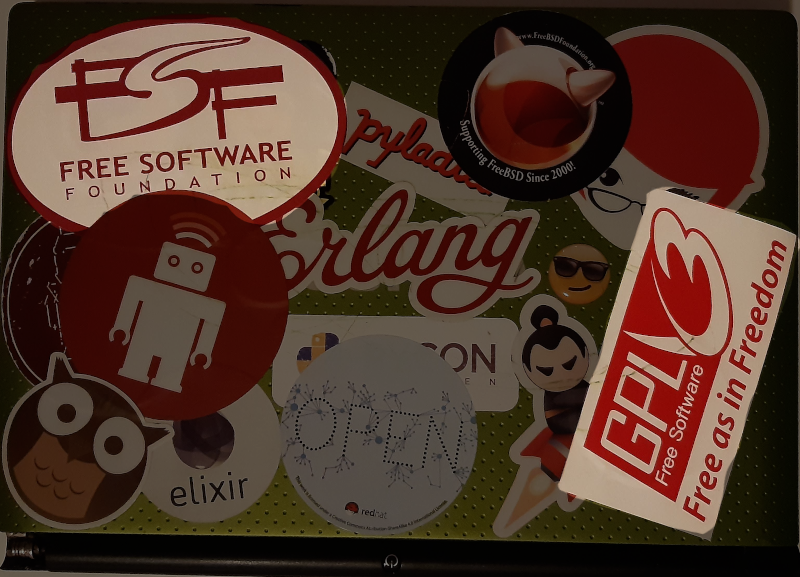 From my more stauncher free software days comes the FSF and GPLv3 stickers. Although I’m not currently a super fan of FSF the GPL is still my go to license. 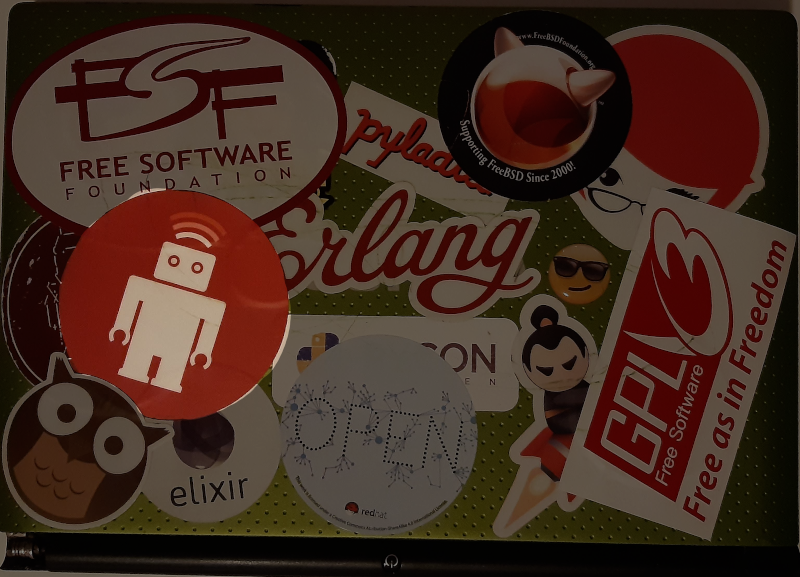 The last sticker that I just couldn’t miss talking about comes from the thoughtbot company. They use to have the best meetup in the world called “The Classical Code Reading Group”. In that meetup we sat around reading classical unix C programs (like yes, uname and others). Comparing the GNU one with the BSD ones and the solaris/illumos ones. My favorite thing about that meetup was the atmosphere and fun we all had. There was also a person who had used to work for Sun back in the days there to explain why the solaris version looked like it did. 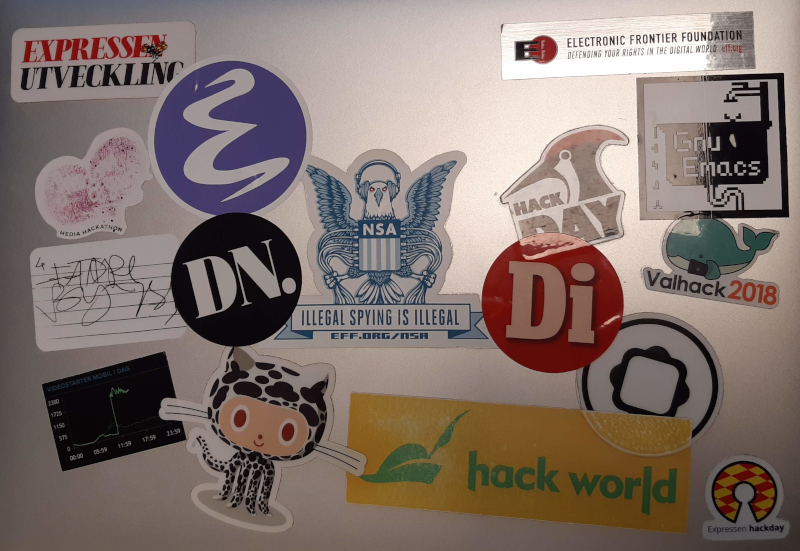 My old work computer had a bunch of stickers as well. Mostly chronicling my work life. Although the bottom stickers are from the EFF (go support them if you have the means!). It mostly shows all the different hackathons we’ve had there, also it shows me going from just Expressen (one newspaper) to the mother company of Bonnier News (owns a bunch of newspapers including Expressen). My favorite sticker is the one at the bottom left which is from when we added autoplay on mobile (not that I enjoy autoplay..). As you can see we did get quite a boost in numbers, we did also however forget to tell the journalists and editors that we had deployed autoplay. Meaning that we did get some panicked messages wondering what the hell was going on.

My new computer currently only sports a single emacs sticker. Hopefully I’ll be able to fill it up with more memories!